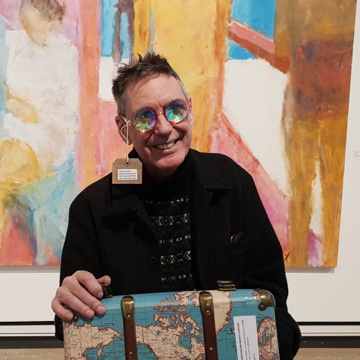 You’re invited to join a conversation about truth and documentary, fiction and writing. Richard will give a 15 minute presentation followed byt a free form conversation.

Richard Butchins is a British filmmaker. He's worked as presenter and director of arts and current affairs documentaries, and as an investigative filmmaker, for television programmes such as BBC One’s Panorama, Channel 4’s Dispatches and ITV’s Exposure. Having had an arm paralysed by polio as a child, and also being neuro-diverse, he uses his own experience as a disabled person to make work which addresses disability. His controversial independently made, The Last American Freak Show won the 2010 Merit Award at the Superfest International Disability Film Festival and the Best Director Award at the Moscow Breaking Barriers festival. His collaboration with 4 non-verbal autistic artists in Osaka Japan The Voice of the Unicorn won the 2018 Sheffield Doc/Fest Alternate Realities Interactive Award.